This project is a “Federal Stimulus Project” funded by the American Recovery and Reinvestment Act of 2009 and consists of repairing approximately 7 miles of roadway and bride decks between Piscataway and Franklin Township and installing a real-time travel alert system for motorists along the same route. The major components of the project include approximately 330,000 square yards of pavement milling and placement of approximately 178,920 tons of hot mix asphalt. In addition, both the northbound and southbound bridge decks of Rt. 287 over Possumtown Road will be replaced as well as the replacement Rt. 287 Northbound Ramp “EA” over Easton Avenue. Other work includes construction of a median cross-over to divert one lane of traffic to the opposite side of the road while the bridge decks are being reconstructed. 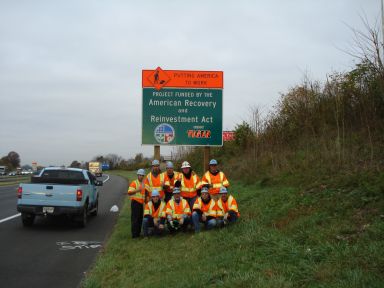